Information on pricing for the current Limerick Lake construction phase (I). All listed prices should only be used as base guidelines, as lot locations, home model options & customizations, and local taxes will affect final cost.

Evacuated tubes are made up of two layers of borosilicate glass,also called “pyrex”. Borosilicate glass is a strong glass that can withstand high temperature. The outer tube is transparent allowing UV rays to pass through with minimal reflection. The inner tube is coated with a thermal radiation absorbing layer, aluminum nitride (AlN). This layer also reduces reflection in order to increase absorption. The two tubes are sealed at one end and the air in the gap between them is evacuated.

The reason for the vacuum space is because it forms a heat insulating barrier and once the radiation is absorbed through the evacuated tubes the heat that is generated will not escape into the atmosphere. This is similar to a common known “thermos bottle. 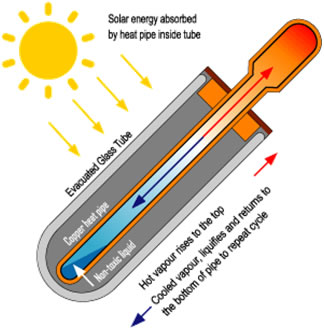 A small amount of this fluid is sealed inside the heat pipe. Once the heat pipe is heated due to the absorbed solar energy the fluid inside it vaporizes and rises to the condensing zone where the heat is transferred to the water flowing through the manifold. The loss of heat causes the vapour to condense and flow back down the heat pipe where the process is once again repeated. The heat pipe is made of copper in order to maximize the heat transfer rate.

A heat pipe can transfer heat 10 000 times more efficient then any other heat conductor.

An evacuated tube is made up of 2 layers of strong borosilicate glass that are joined together. There is a vacuum in between the 2 layers of glass. This layer of vacuum allows the tube to retain its heat once it is gathered. The UV rays are absorbed by an absorbing film which lies in between the 2 layers of glass on the inside layer. This special absorbing film absorbs more than 92% of the UV rays that incident the tube and rejects less than 8% back to the atmosphere.

The heat is transferred by conduction to a copper fin inside the inner layer of glass.

A heat pipe that is inserted into the fin absorbs this heat and transfers it to the copper header at the top of the collector. The heat pipe is a thin copper tube which contains a small amount of purified water. Once the heat pipe is subject to a small amount of heat the water vaporizes and turns into steam. It then rises to the top of the heat pipe where it reaches a condenser. Once the heat is removed from the condenser by a heating fluid such as water or a mixture of water and glycol, the vapor condense to a liquid and returns to the bottom of the heat pipe where it repeats its cycle.

How does a solar domestic hot water system work?

A solar domestic hot water system works in two phases. First, solar energy is captured and converted into heat. This is done by the solar collector. Thermal fluid, which resists freezing, is pumped into the collector where it absorbs the heat. The second phase occurs in the heat exchanger tank where the thermal fluid exchanges its heat to the water in the tank. Thus, the water in the tank is heated and sent to the current heating system.

Is there enough sunshine in Canada to heat water throughout the year?

Can it withstand elemental forces such as high winds, hail and snow?

Yes, the collectors are designed to withstand high wind speeds and heavy snow fall. The glass tubes can withstand hail stones up to 25mm (1in) in diameter.

Why should I install a solar water heating system?

Whether you are a home owner or a business owner solar energy is free and will have a drastic effect on your energy bills. With the rising cost of energy whether, it is natural gas or electricity, consumers will look for a renewable and free source of energy. Wind and solar energy so far are the easiest to implement.

Reducing greenhouse gasses will slow down global warming as well as air and water pollution. Using solar energy will also reduce the demand for fossil fuels.

Property value will increase if a solar hot water system is installed.